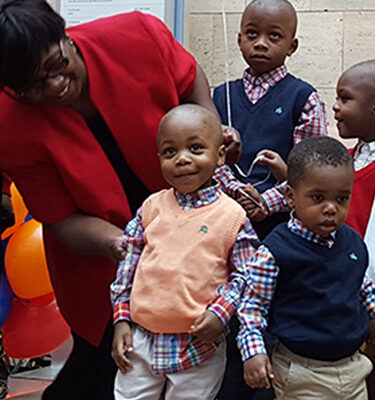 It was around one a.m. on a summer night two years ago when the Tylers first met Jon, Tawanda and Lamont.* They were only 4, 3 and 2 years old at the time, and were staying at a motel with their mom and two baby brothers.

Violence and fear became a fixture in their young lives. The police came when their mom and her companion fought – something that happened as long as they could remember. Their mom sometimes disappeared for long stretches, leaving them without food.

Finally, someone called the child abuse hotline. The children were put in foster care and a family court judge appointed Children’s Law Center to be their Guardian ad litem, charged with looking out for their best interests.

Mrs. Tyler remembers the night the three older children were brought to her house. “My heart just went out to them,” she said. “I could look in their eyes and see the fear and I just kept telling them, you’re okay now. You’re okay.”

She and her husband, long-time Washingtonians and high school sweethearts, are experienced parents. After raising three birth children and a nephew, they also were a foster home to dozens of children.

The Tylers opened their home to many children but this time seemed different. “They were so undernourished and so hungry,” Mrs. Tyler said. And it was clear the children hadn’t bathed in a long time. Mrs. Tyler and her husband helped the kids clean up, fixed them an early breakfast and put them to bed.

The two youngest boys, both still infants, had been placed with another family.

All five children were scarred by their experience: they had developmental delays and acted out the violence they had witnessed. Children’s Law Center worked with the Tylers, the foster care agency and the court to make sure the children received the support they needed to recover from their trauma. We also worked to reunite all five children. 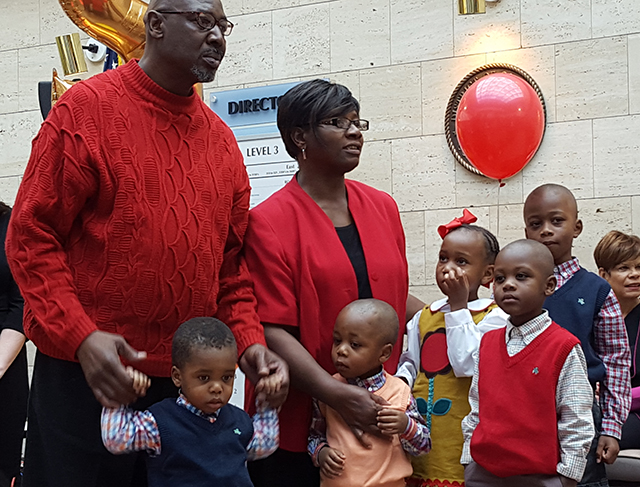 “Children’s Law Center went all out for these kids,” Mrs. Tyler said. “They made sure the kids got what they needed, they were always there for me. I think they grew to love the kids as much as we did.”

The older kids quickly settled in with the Tylers and began calling them grandma and grandpa. But they missed their younger brothers.

“They talked about their younger brothers and wanted to see them. They were like peas in a pod they were so close,”Mrs. Tyler said.

“I’m from the south and if you are hungry we feed you,” Mrs. Tyler said, laughing. “We cook a pot of beans and rice and we let you eat until you are full. And these kids, they were so undernourished and hungry, and I just let them eat and eat until they were full.”

The children also attended preschool. “It was like a whole world opened up for them. They had never been in a learning environment and they liked it. Their eyes lit up,” she said.

Eventually, the Tylers took in the two younger brothers, too.

“I kept thinking: five kids is a lot. But I talked to my husband and said: look, these kids love each other and do we want them to be separated?” Mrs. Tyler said.

At first, they didn’t tell the older ones that the little ones were coming. “I’d learned that things can fall through and I didn’t want the kids to have another disappointment in their lives. Then the day came. When the older ones woke up and saw the little kids there, it was like a big party,” Mrs. Tyler said.

The Tylers knew they never wanted to lose their new family. So they decided to adopt all five children.

Because Children’s Law Center represented the children, we couldn’t represent the Tylers. Instead, we found pro bono help from Steptoe & Johnson – one of over 100 law firms that volunteer with us to help families in need.

Mrs. Tyler raves about the support she got from Steptoe. “They took me and my husband in and guided us through the process. I’m kind of the shy type, but they made me feel comfortable. I learned a lot. I’m so glad they were there for us,” Mrs. Tyler said.

After many court hearings and meetings, the Tylers finally adopted all five children on National Adoption Day, November 21, 2015. They were joined at the courthouse by judges, social workers, their attorneys and over 20 other families who were finalizing their adoptions that day, too.

Finalizing the adoption “is a good feeling,” Mrs. Tyler said. It’s been a long road, but she says she is looking forward to celebrating many Thanksgivings as the big, happy Tyler family.

*We work hard to protect the confidentiality of our young clients and have changed the children’s names for that reason. All other details are true.