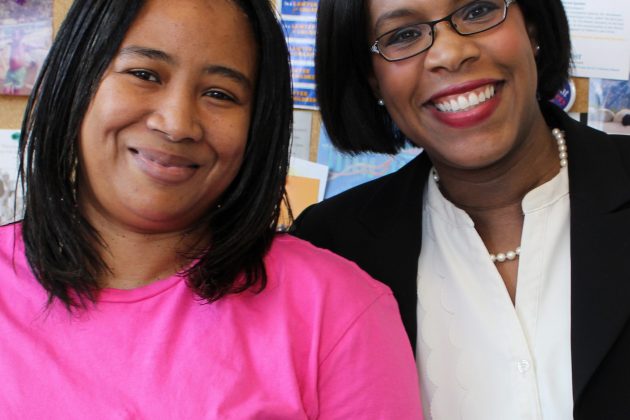 Her 6-year-old son Ezekiel* was being suspended.  Again.  And if she didn’t come quickly the school threatened to call the child abuse hotline.

School officials said he threw temper tantrums and walked out of class.  Sherina was worried and asked for help to see if Ezekial had a learning disability.  The school ignored her request.

Immediately Jani requested copies of Ezekiel’s records and a meeting with the school. Getting the school to look for the cause of Ezekiel’s behavior problems wasn’t easy.

“They would say, ‘this is what it is, this is how it is and we have to suspend him.’ It was just matter of fact, how they treated the situation. Everyone had an explanation but none of them were appropriate,” said Jani.

The suspensions and phone calls kept coming. Eventually Sherina, a single mother, was let go from her job as a merchandise resetter at a grocery store.

On top of the stress of losing her job, Sherina worried about Ezekiel’s future. With so many suspensions, Ezekiel, a loveable kid who dreamed of buying his mom a house someday, wasn’t able to learn consistently. And, when he was in school, teachers seemed unwilling to work with him.

With the help of Children’s Law Center, Ezekiel was independently evaluated. The results were eye-opening.

“The evaluator told me that he was blown away by Ezekiel’s cognitive level,” said Jani.

“(The evaluation) talked about how he had a really high IQ but that he had a complex profile where he still had a learning disability and also still needed behavior support.”

But first,  Sherina decided that Ezekiel needed a fresh start at a school that hadn’t already labeled him.

Armed with her Children’s Law Center attorney and an evaluation explaining her son’s complex needs and potential, Sherina was hopeful. But after a brief honeymoon period with Ezekiel’s new school a different problem presented itself.

While Ezekiel’s evaluation made it clear he was diagnosed with ADHD and a learning disability, the school argued that his high IQ meant he didn’t need more services. Sherina asked for an aide and was denied. She asked for a smaller class and couldn’t get that either. Fighting for even an extra hour of specialized instruction proved excruciating.

Another bump in the road came when the school said he couldn’t have bus transportation, despite being a special needs student. The reasoning? He was too smart.

But Sherina knew her son well. While smart, he was impulsive. It wasn’t safe for him to get himself to school.

Jani advocated for bus service and eventually it was granted.

But fighting for services in school continued to be a battle. After a particularly contentious meeting, Sherina decided it was time for Ezekiel to be moved again.

“If we had stayed at either one of those schools it probably would have gotten to the point of litigation,” says Jani.

The Children’s Guild was opening a new public charter school near where Sherina and Ezekiel lived. With fingers crossed, Sherina entered the school lottery and was able to enroll Ezekiel.

While the beginning was rocky, The Children’s Guild ultimately worked with Jani and Sherina to make sure Ezekiel was safe and learning. Together they were able to get him into a smaller class and access to bus services.

And in the two years since being at The Children’s Guild Ezekiel has blossomed.

“They don’t call at all now. I went to a meeting and they actually told me he’s like the helper of the class. He’s like a role model for the class. He helps some of the kids who don’t know how to do some of the work because they said he’s very smart. He likes helping others.”

At a recent meeting Ezekiel’s teacher said that despite his learning disabilities, Ezekiel is advanced. While he’s a third grader, he functions in many ways at a 6th grade level.  More than high hopes, Jani has confidence in Ezekiel’s future – in large part because of Sherina whom she describes as “savvy” and “articulate.”

“I’ve seen Ms. Davis go from frustrated to being able to articulate those frustrations in meetings. If I were to go to a meeting with her now, she could lead the meeting,” says Jani.

“It’s nice to help someone like that but it’s also nice because you know when you close the case that she’s able to sustain the outcomes. And if things don’t go well she knows when to say, ‘hey, there’s a problem.’ And she knows some steps to take to handle that herself and she knows when to call. She knows enough about the law and special education.”

Sherina is proud of her son. Not only has Ezekiel made honor roll, he told his mom that he doesn’t want to change schools ever again.

“I heard all good reports since last year and this year. I was just so excited. He actually brought home an award. He was so proud of himself. He comes home so excited.”

There is something missing though: Phone calls.

*We work hard to protect the confidentiality of our clients. That’s why Ezekiel’s name has been changed. All other details are true.