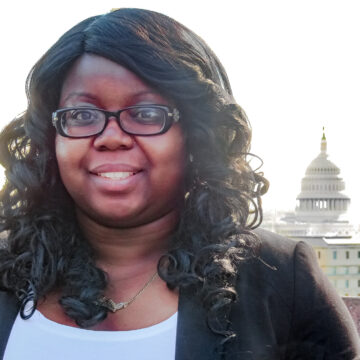 Olabisi M. Davies is a staff attorney in the Guardian ad Litem Program, where she represents children and their best interest in abuse and neglect proceedings. Prior to joining Children’s Law Center, she was a judicial law clerk to the Honorable Justine A. Niccollai in the Family Part and Criminal Part of the Passaic County Superior Court. During law school, Olabisi was a student attorney in the Immigration Clinic, where she represented noncitizens applying for guardianship in Probate Court, special findings of fact in Family Court and relief from removal in the Boston Immigration Court. Prior to that, Olabisi was a judicial extern for the Honorable John J. McConnell, Jr. with the United States District Court for the District of Rhode Island. She’s also had legal internships at Children’s Law Center of California, the Rhode Island Medical-Legal Partnership and the Bronx Defenders. Prior to law school, Olabisi was an outpatient services case manager for child and family trauma as well as case manager in various adolescent residential programs in Rhode Island.