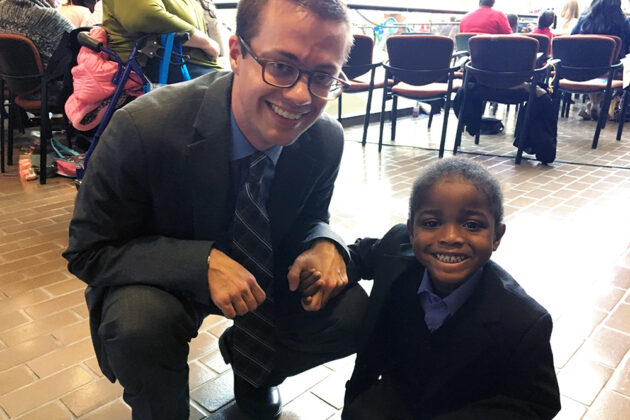 “Looking at this picture of her, I just can’t imagine her smiling like that three years ago. That says a lot.”

Ms. Sylvia, mother of eight and grandmother to more than 12, sits next to him and beams as she explains that Natasha, though shy, is at the top of her class. And Roderick is a healthy, rambunctious toddler.

It was a moment Ms. Sylvia and Evan fought hard to reach.

The two first met in February of 2014 when Natasha and Roderick were removed from their birth mother’s care and placed with Ms. Sylvia – their maternal great aunt.

Initially, Ms. Sylvia only planned to have temporary custody while the children’s mother focused on overcoming her drug addiction and receiving mental health treatment. A DC family court judge appointed Evan as the children’s Guardian ad Litem, charged with representing their best interests.

Evan was there from the beginning, Ms. Sylvia says.  The children arrived on Saturday.  Evan showed up at her doorstep Sunday morning.

In the beginning, Natasha’s school was so far away that Ms. Sylvia spent more than four hours riding Metro every day – there and back in the morning and the afternoon.  And, with school so far away, Ms. Sylvia and Natasha had to be on the bus no later than 6:30 a.m.

Ms. Sylvia wanted Natasha transferred, but didn’t feel she had a voice.

“Talking up for myself, I never really had a problem with that … sometimes, a lot of times, I was being ignored.”

When Evan learned about the long commutes and early mornings, he sprung into action.

“[T]hat showed early on [Ms. Sylvia’s] commitment to the kids. But also, how ridiculous.”

Evan began advocating for a transfer.  In short order, Natasha had the transfer.

As an added bonus, Natasha now attends the same school as her cousins – and her little brother.

But school wasn’t the only hurdle. Contentious visits upset Natasha and Roderick. Meetings between the three parents often happened at Ms. Sylvia’s home, and it was hard to make the children feel safe.

Evan elevated the safety concerns to  DC’s child welfare agency, who agreed to move the visits to a community center or park and to provide a social worker to supervise.

But when one parent showed up under the influence, and Natasha, even at her young age, could tell, Ms. Sylvia alerted Evan.  He filed an emergency motion right away.

Though their mother tried, she wasn’t able to overcome her addiction.  She also struggled with the trauma of being separated from her children.

Ms. Sylvia and Evan realized that it would not be safe for the children to return to their mother.  Instead, it was in Natasha and Roderick’s best interests for Ms. Sylvia to adopt them.

Although Ms. Sylvia had her own adoption attorney during trial so that Evan could continue to represent the children’s best interests, Evan was with her every step of the way.

“When I was on the stand, we do breathing exercise. I would look at him and he would be breathing, so I would stop. [take a breath]. Calm down,” says Ms. Sylvia.

And, after two and a half years of bus rides, visitations and court hearings, Natasha and Roderick’s adoption was finalized on Nov. 21, 2016 at DC Adoption Day.

“Even though the kids were adopted they can maintain a sense of family, [be with] the people they’ve known forever and see their [biological] mom occasionally.”

As part of their adoption, both Natasha and Roderick insisted on new names – first, middle and last. But not just any names. Ms. Sylvia had a surprise.

“When he told me his [first] name was Roderick there was not another middle name for him but Evan. I didn’t have to think about his middle name,” Ms. Sylvia explains,

It’s an honor not lost on Evan.

“I just about cried when she told me.”

And, thinking back, Ms. Sylvia, says the process doesn’t feel as hard as it was.  Because the children had a lawyer from Children’s Law Center who understood that the best way to help Roderick and Natasha was to support their loving, tenacious caregiver.

Looking toward the future, Ms. Sylvia sees only possibilities for Roderick and Natasha. Through an inheritance, she was able to purchase a plot of land and plans to build a new home for her family, offering them a fresh start.

But Natasha? She has more specific plans.

She wants to be a lawyer.

*We work hard to protect the confidentiality of our clients. That’s why Natasha and Roderick’s names have been changed. All other details are true.