Breaking the Cycle of Neglect 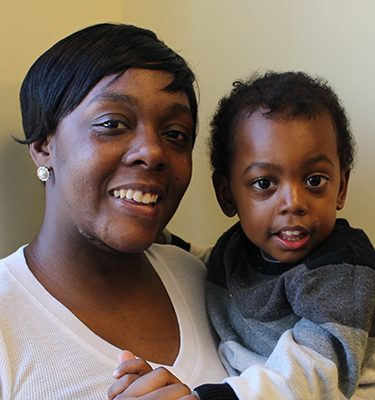 “Without Children’s Law Center, I wouldn’t have *Akhil.”

Ellen Medley spent her childhood in foster care. She had “a lot of lawyers.” She can’t remember any of their names.

But when Medley’s son, Akhil, went into foster care, the judge appointed Jess Kurtz from Children’s Law Center to look out for his best interests – giving Medley the chance to see what a tenacious, caring lawyer can accomplish.

Kurtz realized immediately that Akhil wasn’t safe with Medley while she was using drugs. But Kurtz also saw that she had good parenting skills and was determined to protect her son from her drug use. So Kurtz advocated for Medley to participate in Family Treatment Court, a program for mothers whose substance abuse problems have led to allegations of child abuse or neglect.

“I had a very tough love phone call with Ellen,” Kurtz says. “I told her she had to step up, and she did.”“It was a big wake-up call for me,” Medley remembers.

Like many children in foster care, Akhil had serious developmental delays. Although he was more than a year old, he couldn’t walk, talk or eat soft foods.

From the start, Kurtz fought for early intervention services, such as speech and occupational therapy, so Akhil could catch up. Once Medley was stable in treatment, Kurtz included her in meetings so she could learn to advocate for Akhil herself. It worked. When home-based services weren’t intensive enough, Medley secured a hard-to-get spot at a full-time child care program for children with special needs.

When Medley graduated from the Family Treatment Court program, she regained custody of Akhil. Now that she is drug-free, she has become the mother that Kurtz knew she could be. Akhil’s speech therapist gave Medley tricks to get Akhil to talk more at home. She’s using them, and Akhil surprises her with all he’s learning. He can walk, repeat everything she says and is learning sign language.

To make Akhil’s first Christmas at home with his mother special, he participated in Children’s Law Center’s Holiday Hope Drive. Akhil received a LeapPad and a toy car – and Medley received a $200 gift card that she used to buy groceries and clothes. The gifts meant as much to Medley as they did to Akhil.

The best gift of all, however, is what Children’s Law Center did to help Medley break the cycle of abuse and neglect, and to give Akhil a chance to grow up with a loving mother who can fight for the education and health care he needs.

*We work hard to protect the confidentiality of our clients. That’s why Akhil’s name has been changed. All other details are true.