“It’s a warm feeling, being a mom:” Heartbreak and a joyful reunion 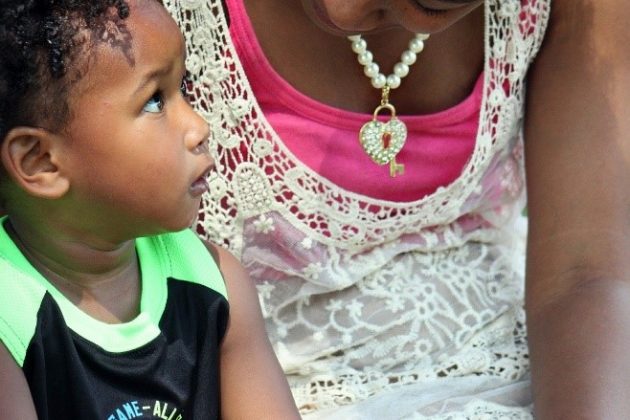 Lauren Jones* is the definition of a survivor.

In 2014, she was trapped in an abusive relationship. Every day she endured insults and threats, which regularly led to violent assaults. As a result, her pre-school-aged children, Dave and Diane, were taken from her home and placed in foster care. She and her children would be apart for four long years.

As part of her role, Vindell observed visits between Ms. Jones and her two children on numerous occasions. The visits between them were always nurturing and full of joy. Vindell remembers how Ms. Jones was always appropriate with Dave and Diane during these supervised visits. This showed Vindell that with the right supports, Ms. Jones could successfully have her children back in her care.

“It’s difficult and often dangerous to leave a toxic relationship, which is when the risk of homicide is the highest. That is what was keeping Ms. Jones from her children.” Vindell recalls. “But she knew she had to fight for her kids and put them first. Her love was just so powerful for her children. It was her driving force.”

Knowing that reunification was in Dave and Diane’s best interests, Vindell worked closely with Ms. Jones to get her the supports she needed to safely care for her children.

Because leaving an abusive relationship takes not only courage, but insight into what it takes to break the cycle of violence, Vindell advocated for Ms. Jones to receive the right kind of therapeutic support that could help her gain the strength she needed to leave her boyfriend.

Ms. Jones recalls how downtrodden she felt at that time. She talks about daily forced sex and abuse, and also being told she was dumb, a bad mother and that she would never get her children back. She felt like there wasn’t much point to her life—the only thing that kept her going was the hope of reuniting with her children.

$60 and a Mother’s Determination

Ms. Jones knew that to get Dave and Diane back she had to be brave, so she gathered her strength and left.

“One day I was at work, and I will never forget it. I cashed my paycheck, and with only $60, I left. I spent the night at a motel and applied for Rapid Re-Housing the next day,” Ms. Jones shares. “Your bond with your children is a bond that can never be broken. Everything I’ve done, everything I’ve overcome is for my children.”

Ms. Jones told her boyfriend that she was permanently done with him.

Ms. Jones went to domestic violence classes, got the mental health supports she needed, moved into her own apartment and separated herself completely from her abusive partner. She recalls that Vindell was one of the only supportive forces in her life, reminding her she was strong and could fight for her children.

“It was such a difficult situation, but Ms. Jones never gave up,” Vindell said. “I just had to remind her that she is a great mom. She never missed a visit with her children.”

Vindell remembers a pivotal moment when Ms. Jones said that she’ll never put her children in an unsafe environment again. She wants her children to grow up happy and healthy, and most of all, to grow up with their mother by their side.

Although Ms. Jones would at times feel sad that she could not offer her children the kind of things she wished they had, Vindell would remind her that she is offering them the best gift of all—her love and support.

Vindell reminded Ms. Jones that she is stronger than she thinks, and that although she did not have as many supports in her family as she wished, she was still doing a great job. Ms. Jones moved from supervised visits to unsupervised visits, to overnight stays with her children.

Now, they are permanently reunited as a family.

“My days are more happy now—it’s a warm feeling, just to be a mom again. I love getting up at 5 a.m. to get my kids ready for school, doing homework in the afternoon, making dinner with my daughter.”

She hopes that by telling her story she will inspire other domestic abuse survivors to walk away. She says that yes, it will be hard, but you will be happy again.

It’s About Our Kids

At Children’s Law Center, we see firsthand that children do best if we can address the root cause of abuse or neglect and reunite them with their birth parents. In fact, DC law requires the government to prioritize reunifying families.

Sometimes, a parent just needs the right resources to be able to care for her children. Every day, we see how tenaciously parents like Ms. Jones fight for their families and how many hurdles they overcome—all because of their deep love for their children.

Ms. Jones puts it perfectly, when she says “At the end of the day, it’s about our kids. That’s what matters.”

If you’re struggling with domestic violence, there are resources to help you and your family. Visit dccadv.org/resources/get-help/ to learn more.

*Children’s Law Center works hard to protect our clients’ confidentiality. The family members’ names have been modified based on the client’s request. All other details are true.