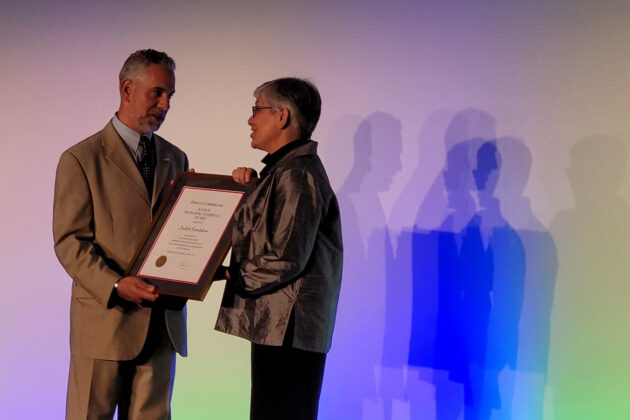 The D.C. Bar presented Children’s Law Center Executive Director Judith Sandalow with the Thurgood Marshall Award – recognizing “extraordinary commitment and initiative in pursuing equal justice and opportunity for all Americans” – at its annual Celebration of Leadership on June 23rd.

Jim Sandman, Legal Services Corporation president emeritus, described Judith in his award introduction as “a formidable lawyer, an extraordinary leader, a visionary, an innovator, an entrepreneur, a builder, and a pragmatist.”

“Judith Sandalow has been a warrior for justice since the day she became a lawyer.”

Judith used her time on stage that night to call on those in the audience – including policymakers, judges and attorneys in public service and private practice – to expand their understanding of justice and to commit to doing more for DC kids and families.

Below are Judith’s full remarks from the event:

Receiving an award named in honor of Justice Thurgood Marshall is so completely humbling.

As I sat down to write tonight’s remarks, I wanted them to be worthy of his example and to express the award’s intent – to advance the cause of equal justice.

Over the three decades of my legal career, I’ve seen how longstanding structural racism has led DC to be a city in which the overwhelming majority of kids and families living in poverty are Black and brown. And that the fight for equal justice is, first, a fight for access to justice.

That’s why it’s also an honor to be introduced by Jim Sandman, who has made access to justice a reality for so many and who speaks so passionately about justice as shelter, safety, family – and basic human dignity.

Usually when I speak, I tell my audience about Makia or Ms. Harris or another one of the thousands of clients Children’s Law Center has worked with.

But I only have five minutes.  So, I’m going to ask you to do my work for me.

Take a moment to think about a client you’ve represented.

What did justice mean to them?

What would have happened if you weren’t there to represent them?

This audience is full of lawyers who have taken action – handled pro bono matters, advocated for changes in our profession, made a career of public service.

You’ve chosen not to sit on the sidelines. You’ve gotten into the game to ensure justice.

And, yet today we are still so far from being a city in which all residents have shelter, safety and access to legal assistance.  Despite all our hard work.

I believe a key reason is the wealth and income gap.

Let me illustrate just how far that gap has widened.

My father passed away earlier this year and, looking through his papers, I found a letter from 1959 offering him a job at a major law firm. He was clerking for the Supreme Court at the time. The salary he was offered? $9,000.

So, the minimum wage in adjusted dollars is only 50% more, but a first-year associate without a clerkship makes 250% more and a Supreme Court clerk going to a big law firm with a signing bonus is paid 600% more now than in 1959.

But forget history for a moment.  Here’s today’s reality:

If a DC resident works full-time at minimum wage, they make at best $30,000. A law firm associate – in their very first year of practice – makes seven times that: more than $200,000.  Partners – I’ll let you fill in your share.

Justice goes beyond our time in the courtroom, beyond representing a low-income client. How we build our legal institutions matters. Simply by being lawyers in this city we are all already in the game.

What does that have to do with lawyer compensation?

Now I’m going to say something hard to hear.

They actually reduce access to justice for low-income children and families.

One reason is that wealthier people spend their money – they can afford to pay more for childcare. To pay more to buy a home.

It is one thing for a legal services lawyer to choose to take fewer vacations abroad and eat out less often.

It is quite another thing to forego stable housing and having children because rent or childcare is too high.

But these basic opportunities are increasingly out of reach for my colleagues because private lawyers have helped drive up the cost of living in this community.

So legal services organizations do their best to raise salaries.  But unless they bring in more revenue, that means they must hire fewer lawyers – which reduces access to justice.

And what about children and families living in poverty?

Unlike people who have the means – children and families living in poverty can’t purchase their way out of challenging situations. They turn to family, neighbors and public agencies for help. And when all else fails, they turn to legal services organizations.

What am I suggesting?

Something very basic: That if you choose to make a higher salary, it isn’t charity to share your wealth. It’s justice.

The economics of law has an impact on justice.  And all of us are part of it.

I use first year associate salaries to make a point.  But this applies to all lawyers– I may not work at a big law firm, but I certainly make a lot more money than our clients do.  And so do law firm partners.

I planned to begin these remarks by talking about the legal giants, like Justice Marshall, on whose shoulders I stand.

But I only have 5 minutes.

And tomorrow I go back to work with my almost 100 colleagues at Children’s Law Center, two of whom, Tracy Goodman and Sharra Greer, are here with me tonight.  The truth is that I take credit for my colleagues’ successes every single day – and if I’m worthy of this award it is because we earned it together.

I couldn’t look them in the eye if I didn’t speak up for justice.

My colleagues aren’t alone in the fight. I’ve learned over the years that when it comes to justice, parents and youth are among our most tenacious fighters.  If I had time, I could name so many – but tonight, I will only name one who is here with me: my older son, Antonio, who I met after he spent years in foster care and who has taught me so much about healing and courage – and who is now a wonderful father to my grandchildren.

Of course, the cause of justice is faster with the right policy makers.   Leaders like DC Council Chair Phil Mendelson, Attorney General Karl Racine and Chief Judge Anita Josey-Herring – also here with me tonight.  Each has used their position to expand access to justice.

But I know they will understand that I end with this: Each of them and each of us has an obligation, by virtue of our profession and our position to fight for justice.  To fund justice.  And to do justice.