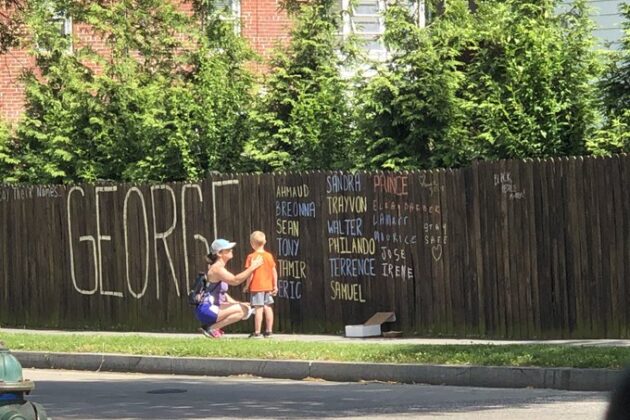 I want to start this letter with one simple message – Black Lives Matter.

The pandemic, the number of Black lives lost at the hands of police and the protests of the last few days highlight how far away we are from our civic and political structures embracing these same ideals.

I am a mother of two Black sons. I worry every night about their safety and whether they will make it home or be stopped by police. And as the executive director of an organization that works with thousands of DC’s Black residents, I see how our laws and government policies regularly advantage white residents.

The pain and rage expressed in cities and towns across the country over the last week have been building for 400 years. Systemic racism is built into the fabric of our country. It makes what Children’s Law Center fights for every day on behalf of DC’s children and families even harder to achieve.

This is trauma. Racism is trauma. It is why the American Academy of Pediatrics named racism a public health emergency. Yet even after 400 years, the death and destruction it has caused has never received the focus and attention that COVID-19 has. It should.

Over the years, I’ve penned many statements, letters, op-eds and emails. In each and every one I’ve shared stories of the Black children and families we work with. Their resilience. Their fight. The hurdles and obstacles they have overcome.

Today, I’m here with a different message. It’s one I’ve tailored for my white peers – especially white parents. If you are Black – feel free to read on or share this with your white friends and neighbors.

At Children’s Law Center, our mission is the wellbeing of children. And we know the powerful role that parents play in their children’s future.

That is why I ask you to talk to your children about racism. I know it is hard and I know it’s only one piece of the complex puzzle that we need to stay focused on in order to truly combat these injustices.

I recall the many conversations I had with my sons about race when they were younger, but I also know those conversations were vastly different than the ones Black moms and dads are having with their kids right now. It is so critically important for white parents to talk with their children about anti-racism starting at a young age. It can’t fall on Black parents alone.

I’d like to invite you to join me in sharing books, videos and other resources to help white parents speak with their children about racism. Below are some we have collected and shared within our organization:

What else have you seen and read? Share with us or post on social media using the hashtag: #RaisingAntiRacistKids.

Racism is embedded in all our institutions, not just the police.

The pandemic has disrupted almost every facet of society. Let’s commit to using it as an opportunity to disrupt racism as well.

The time has come to create a new normal – one where our institutional systems no longer treat Black lives as less important than mine or yours.

We need to be more than just allies – we must actively be anti-racist. I know I have much to learn. Join me as we collectively turn that learning into action: fighting against racism and fighting for children every day of the year.

Photo credit: A mom speaks with her son about Say their Names art in DC. Photo by Scott Goldstein, EmpowerED DC