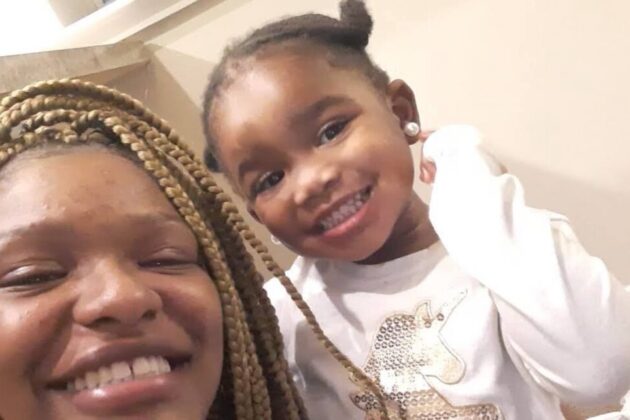 Deveah’s smile brightens the room at Chuck E. Cheese, especially when she takes a turn on the horsey ride. She and her mom, Ms. Bowen, love the spot so much that the staff know them by name. It’s become the perfect getaway for them to take their minds off Deveah’s health issues.

Ms. Bowen moved to the District from Maryland when Deveah was just a baby. Deveah developed asthma after being hospitalized for pneumonia and often needing intensive treatment at Children’s National. She’d required multiple medivacs to emergency care and at one point had to be intubated.

Unfortunately, they haven’t been able to access stable, healthy housing while seeking treatment for Deveah – and the first two places they’ve lived have only made Deveah’s respiratory issues worse.

“I had to clean with bleach every day because the mice run all over the counters,” Ms. Bowen recalled as she thinks about her first home.

She spoke to the rental office repeatedly, asking them to fix the problem. But even when someone came in to patch up the mouse holes, the mice would start slipping through again less than a week later.

After 16 months in the unit, Deveah had been hospitalized seven times, including six stays in the Intensive Care Unit. Ms. Bowen was told she couldn’t get approval to relocate to new home through rapid rehousing – the housing subsidy program she relied on – unless it was considered an emergency. It was a puzzle too big to solve alone.

Ms. Bowen asked Deveah’s pediatrician for help, and they connected her with Children’s Law Center.

Our lawyers worked with Deveah’s doctors to confirm that the Bowen’s home was putting Deveah’s life at risk and then secured an emergency transfer to a new home.

The Bowens were thankful to be approved and in their new home, but from the very first day they moved in, Ms. Bowen began to notice significant mold and cockroach issues.

Though units eligible for rapid rehousing are supposed to be inspected and clear of any housing code violations, many still have significant problems that can be life-threatening to children with respiratory issues. In 2021, 189 of the families participating in rapid rehousing were approved for transfers due to housing conditions, but with so few units available, only 91 of those families were able to move.

As Ms. Bowen tried to get the new problems fixed, she grew more concerned about her daughter’s health. She reached out to Children’s Law Center again.

“I kept calling the rental office, but no one would answer,” Ms. Bowen said. “Children’s Law Center listened.”

“The landlord’s neglect of his legal obligation literally put Deveah’s life at risk,” explained Colleen Smythe, her Children’s Law Center lawyer. “Families should not have to work this hard to keep a safe and stable roof over their heads.”

While Children’s Law Center and Ms. Bowen advocated for Deveah’s health, the rapid rehousing program stopped returning her calls. Ms. Bowen emailed them in distress over her daughter’s condition, and they responded by wrongfully terminating her from the housing program.

Thankfully we were already working with Ms. Bowen and were able to begin solving this new part of the puzzle.

“If we weren’t already partnering with Ms. Bowen, she wouldn’t have had any protection or support from losing this subsidy,” shared Colleen.

Colleen and Ms. Bowen successfully appealed the termination and are now working together to secure the family a safe, healthy home.

Every family we work with is unique; no two paths are the same. With Ms. Bowen, we’re continuing to put together the final pieces of the puzzle – and still figuring out which piece will be the right fit: working with the landlord to get sufficient repairs in the current unit, filing a complaint through the court to force the landlord to make the required repairs or ensuring the Bowens are moved off the waitlist and into a permanent housing program.

When they’re not at Chuck E. Cheese, the two play at the park or stay at home singing along with CoComelon. She urges other parents in her position to “keep fighting and stay strong” for their kids.

More from our 2021 Annual Report